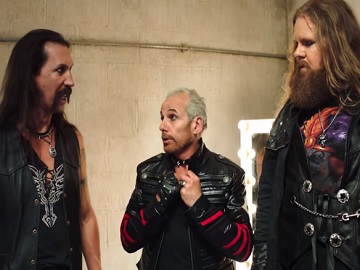 The new Haribo Supermix advert shows that even an unlikely group of softies can enjoy the soft side of Supermix.

The 30-second spot, which is part of the brand’s “Kids’ Voices” campaign, features the members of a heavy metal band going backstage and opening a pack of Haribo Supermix. The leather-clad rockers, full of tattoos and looking aggressive, start then talking about how the soft textures and creamy flavours in Supermix make them feel. One of them says it’s “super stretchy and super squishy,” another one says it makes him feel super-relaxed and another one, with long hair and beard, who strokes the head of one of his mates, says it’s “smooth like a dolphin”.

The spot, which was created by the London agency Quiet Storm, ends with all of them having a group hug and with a rock version of the Haribo jingle.

Earlier this year, in April, Haribo launched another ad which follows the same formula, with adults talking about the Haribo candy in the voices of children. Set in an elevator, the spot features four adults and a child, which marks a first for the brand’s advertising campaign. The latter says – in a deep man voice – that the Haribo has 30% less sugar.