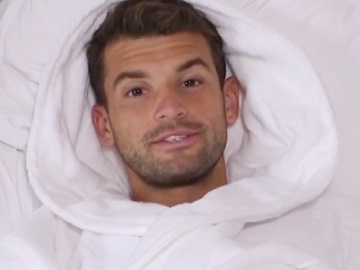 Tennis star Grigor Dimitrov spent time with Häagen-Dazs during a rain delay at Wimbledon in 2017 and some of the images resulted in a commercial in which he promotes the brand’s ice cream.

The Bulgarian tennis player, who has been recently announced as a global ambassador for Häagen-Dazs, the “Official Ice Cream” of Wimbledon, is seen indulging himself with a Häagen-Dazs ice cream during the rain. “The next best thing to winning Wimbledon” – he says in the 15-second spot, referring to the respective ice cream.

This is not the first time Dimitrov helps Häagen-Dazs to promote its products. In July 2017, he teamed with the American ice cream brand to sample their Strawberries & Cream ice cream in Wimbledon, which implied him serving up ice cream in front of a Morrissons supermarket in Manchester, UK.

In order to celebrate the partnership, during the Australian Open, the world number three, in which he is currently competing, will share with spectators at the Häagen-Dazs Bar at Melbourne Park, his first bespoke flavour creation.