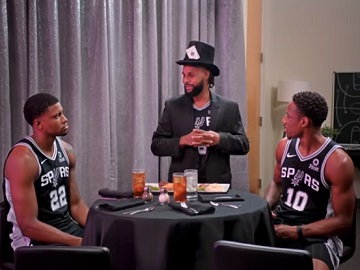 Patty Mills wows the Spurs with his magic tricks in one of the latest H-E-B commercials, advertising the Meal Simple, which makes chef-made meals in minutes.

The 30-second spot features Mills approaching teammates Rudy Gay and DeMar DeRozan and asking them if they want to see a magic trick. Receiving an “Yes” as an answer, he brings over two plates with steakhouse salmon and bacon-wrapped fillets with veggies made in just minutes. Rudy tells him this is H-E-B’s Meal Simple, not magic, which makes Patty show off another magic trick, consisting of taking out a fork from behind Rudy’s ear. “And how do you explain this step?” he asks, leaving the two asking themselves how he did that trick. “A magician never gives away his secrets… or his dinner,” Patty replies full of importance.

The commercial ends with the voiceover saying “H-E-B Meal Simple. Over 200 choices of chef-inspired meals ready in minutes.” The retailer states that each of its chef‑inspired meals is packed with flavor and ready to serve in minutes and invites you to enjoy a restaurant quality meal – from grab and go salads to casseroles and entrees – without the high cost of going out. The H-E-B Meal Simple range includes Chicken Tortilla Soup Kit, Zucchini Spiral Pho Soup Kit, Beef and Broccoli with Jasmine Rice Meal Kit, Baked Potato Soup Kit, Beef Stroganoff with Green Beans, Coconut Curry Chicken, Butternut Squash Spiral Pho Soup Kit, and more.