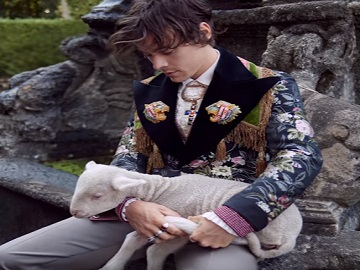 Shot in the Renaissance gardens of the 16th century Villa Lante, near Rome, the campaign features the singer in the company of a lamb, a goat and several piglets, while rocking the latest tailoring designs by Alessandro Michele, included in the label’s Cruise 2019 collection, which includes “pattern, coloured jacquards, intarsia knits, patches and unusual proportion”. Kimonos, bows, tiger brooches and a subtle golden crown are also showcased.

Earlier this year, the former One Direction star fronted Gucci’s Autumn campaign, which was shot in a fish-and-chip shop in St Albans, north of London, posing with a chicken and a dog. Styles has been a Gucci ambassador since last year. However, he has favored the brand for years, wearing around 800 suits on his recent tour.