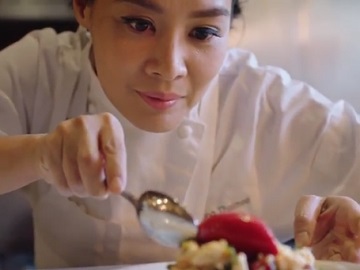 Grubhub promotes, in a new commercial, the RestaurantHER initiative, which is aimed at supporting women-led restaurants nationwide.

The 30-second spot is a call to women who command knives and an entire kitchen, for women “who run their own kitchens and for all the people who tell just by ordering a meal”.

RestaurantHER is an initiative launched earlier this year, in February, in partnership with Women Chefs & Restaurateurs, in an attempt to support women-led restaurants nationwide, as well as women in leadership roles across the restaurant community.

The online and mobile food-ordering company also committed to contribute $1 up to $1 million and help, through WCR – Women Chefs & Restaurateurs, women seeking to advance culinary education and gain recognition in the food industry.

On the website dedicated to this campaign, Grubhub provides a map of woman-led restaurant locations nationwide to allow people locate and support restaurants owned or co-owned by a woman or a kitchen led by a woman head or executive chef.