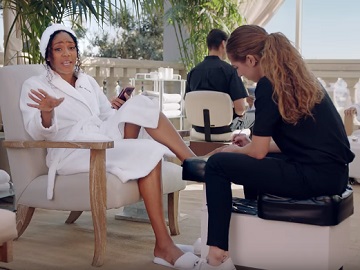 Groupon has released a new ad starring Tiffany Haddish, highlighting that you can save up to $100 a week on what you do every day.

The 30-second spot features the actress/comedian, who has been recently named Groupon’s brand ambassador, sharing her experience with Groupon while having her pedicure done. “Everybody’s like ‘Tiffany, you’re a celebrity now. Why do you still use Groupon? Aren’t you worried that people will think you’re cheap?” – she asks obviously imitating someone and then she gives the answer to these questions, addressing it to Amber: “Shut up, Amber, I can’t stand you sometimes. Groupon makes me look good. Look at all it is. My skin is like ‘Whaat!’, my nails are like ‘Yes, ma’am!’, and my face is like ‘Hello stranger!’.

At the end of the spot, Tiffany is seen taking her smartphone to get another Groupon using the Groupon app and revealing she’s about to get wrapped in mud, next.

The “Girls Trip” actress, who boasted her love for Groupon last summer, on Jimmy Kimmel Live!, telling also the story of how she took Jada and Will Smith on a Groupon trip, will also star in a 30-second spot done by O’Keefe Reinhard & Paul, that will air during the fourth quarter of the Big Game, taking place on February 4th.

Among the celebrities starring in this year’s Super Bowl ads are also Matt Damon, who showcases Stella Artois’ limited-edition Chalice and promotes the brand’s initiative of donating money for every chalice purchased to Water.org, an NGO that provides clean water to people impacted by the global water crisis, and Bill Hader, who teamed up again with Documentary Now! Director Rhys Thomas for a witty and hilarious ad for Pringles.