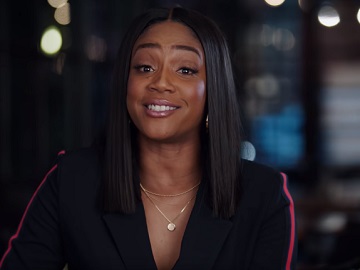 Among the companies that will air a commercial during this year’s Super Bowl, taking place on February 4th, is also Groupon. The company has recently announced Tiffany Haddish as its new spokesperson and revealed that she will appear in its ad for the Big Game.

The Girls Trip star, who landed the deal after telling, on Jimmy Kimmel Live!, the story about how she took her co-star Jada Pinket Smith and her husband, Will Smith, on a Groupon Cajun Swamp Tour, answered a series of questions for Groupon, resulting in short spots in which she reveals what qualifies her to be the Groupon spokesperson, what she would do if she were the CEO of Groupon, as well as some personal thoughts and memories, like the perfect Groupon date and her favorite Groupon memory.

Tiffany said her favorite Groupon memory was when she went to Thailand and China for $1400 and she got dinner, tours, and got to stay in “what they call a five-star hotel” in Thailand and she didn’t have to pay nothing extra. Moreover, she ate “really weird things”, so she lost seven pounds.

Groupon’s Super Bowl 2018 ad, from O’Keefe Reinhard & Paul and set to air during the fourth quarter of the Big Game, will be its first in seven years.