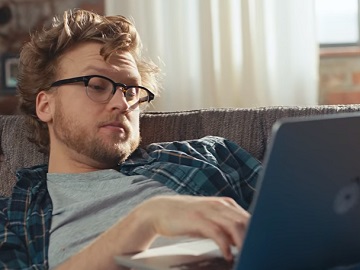 Grammarly continues to advertise its free writing app in a new commercial, part of the “Write the Future” digital ad campaign.

The spot, created in partnership with Mustache content agency, features a best man writing down his toast for his best friend’s wedding and using Grammarly to correct the various mistakes he does, from punctuation, to spelling to wording, the app giving him alternatives that sound better. As he starts putting into words the story he has in mind for the big day, while having breakfast, discovers that Grammarly is really helpful as it highlights all the things that need correction or change, such as “Jack and me,” (which becomes “Jack and I”), “relationship disasters,” (which becomes “relationship mishaps” once he is given a series of synonyms to choose from), and more.
Finally, as he holds the toast at the wedding, the protagonist manages to impress everyone and especially the groom, who is almost brought to tears.

This is only one in a series of instalments aimed at showcasing the variety of situations when Grammarly can be an ally for its users. Other videos feature a student who works up the courage to write something bold and pursue a future in journalism, a fundraiser who organizes an event, and a Brazilian woman who founded a start-up and helps make it grow.