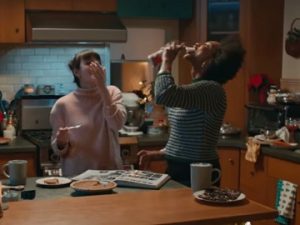 Google advertises its video calling app Google Duo in a series of new ads, highlighting that, while the holidays bring us together, after the holidays there’s Google Duo to help you stay in touch.

One of the spots features two best friends from high school who only see each other once a year. They are seen eating whipped cream directly from the bottle, one evening, in the kitchen, and later on, one of them is seen putting a lot of whipped cream on a slice of cheesecake. “But you could see her once a week,” the voiceover says, mentioning that with Google Duo it’s easy to share any moment with a video message and call back with just a tap so you can keep the good times rolling all year round.

Another spot features a young woman who sees her brother over the holidays and teases him for eating only the heads of the gingerbread cookies they have and gets to do that even after the holidays, when they use Google Duo to make video calls, despite being on different operating systems, iOS and Android respectively.

With Google Duo you can make simple, high quality video calls for Android and iOS smartphones and tablets. It only takes one tap to start a video call and connect with your closest friends and family. Moreover, with the Knock Knock feature, users get a live video preview of the person calling them, so the fun starts before the conversation even begins.

If the person you’re calling can’t pick up, you can can still capture the moment you wanted to share by leaving a video message.