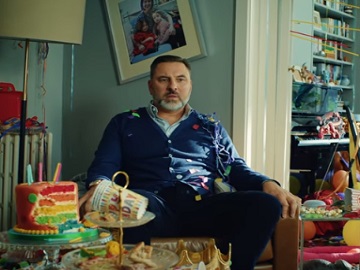 Google advertises the Google Assistant also in the UK, highlighting the many things this virtual assistant can help you with.

The 30-second spot features several persons that take mental notes on what they should do, followed by the onscreen line “Make Google Do It”, which is the tagline. Thus, a man sitting in an armchair, after a party thrown at his place, lists the things he must do: “Must remember to repaint the walls, wash the cat, fix the toilet, and apologise to the clown.” A guy in a restaurant thinks he should text his friend and let him know about the delicious meal he’s having and a woman in a submaring asks herself if she left the heating on. Finally, an actor does make Google do it by asking the Google Assistant to call his agent.

For the ad campaign running in the US to promote the Google Assistant, the tech giant enlisted several celebrity figures, including Kevin Durant, Sia, Chrissy Teigen and John Legend, to star in dedicated spots. In one of them, for instance, the Golden State Warriors small forward, for instance, worried not to miss the Royal Wedding (the wedding of Prince Harry and Meghan Markle, which took place on 19 May 2018 at Windsor Castle in England), asks Google to set an alarm while he’s lifting weights at the gym, Sia uses it to set a reminder to order flowers for her assistants, and Legend and his wife use it to search for a TV show. A 90-second spot, including all the above
mentioned stars, aired during this year’s Oscar Awards show.