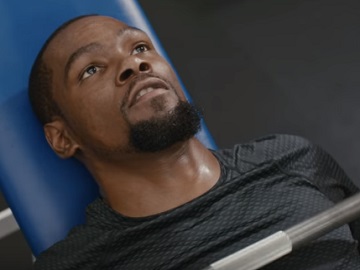 Kevin Durant is worried not to miss the Royal Wedding in the latest Google commercial, promoting the Google Assistant app.

The 30-second spot features the Golden State Warriors small forward at the gym weight lifting and thinking about one of the most important events of the year. “2018 is going to be great. It’s not every year that there’s a royal wedding. It’s been what, seven years since Kate and William? And now Prince Harry is finally settling down,” Durant’s voice is heard saying, asking then “What time is that on TV?” He says that “if it’s 11 in London, that’s 3 AM in Oakland. That’s really early” and concludes that he’d better set an alarm.

The spot ends with the tagline “Get the Google Assistant and make Google do it.” and informs that the app is available for download on AppStore and Google Play.

Google, which is facing stiff competition from Amazon (with Alexa), teamed up with Durant and other celebrities including Sia, John Legend and his wife, Chrissy Teigen, to highlight in funny commercials the things the Assistant can take care of to make our lives easier, from replying to notifications, taking notes, setting reminders, to searching for a TV show, turning on lights and locking the door. A 90-second spot, including all the above mentioned stars, aired during this year’s Oscar Awards show, but, besides smiling at the hilarious scenes, it made some think of the tech giant it encourages people to be lazy and seeks their dependency.

Earlier this year, in February, Google announced that Assistant would gain multilingual support, more languages, and Routines throughout 2018, get a wider international launch, as well as deeper device integrations on Android.