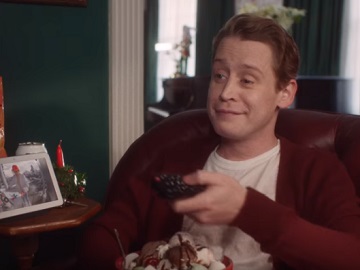 The 38-year-old actor is home alone again, but this time he has his smart assistant to handle some situations for him. He has re-created some of his famous scenes from the 1980 Christmas classic “Home Alone” to the delight of his fans.

Thus, the grown up version of Kevin is seen indulging himself with lots of ice cream and watching a movie when a pizza delivery guy shows up at his front door. Using Google Home to watch the latter, who mentions that the customer paid for his order online, Kevin uses the remote control to have a movie character say the line “You can keep the change, you filthy animal!”.

The song playing at the end of the ad is the 2018 song “Tools” by Reese Ransm.

Culkin is also seen jumping up and down on the bed just like in the the movie, except this time he hurts his back and has to drop to a knee, and realizing he’s out of aftershave.

Google Assistant, which works with your favorite services and home devices, helps you shuffle your favorite playlist, dim your Philips Hue lights with just your voice, or stream Netflix to your TV with Chromecast. Google has announced that more partners are on the way.