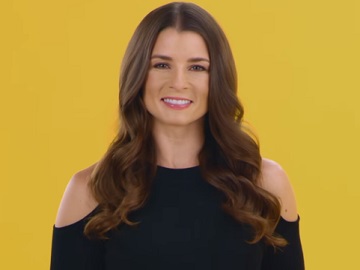 Danica Patrick encourages people to make their ideas real with GoDaddy in a new commercial for the Internet domain registrar and web hosting company.

“I’m leaving the track behind, but I’m not standing still. And with GoDaddy, I’ve made my ideas real. I made my own way. Now it’s time to make yours,” the American professional racing driver and model says in the 30-second spot, which opens with her taking off a GoDaddy helmet after getting off a race car. She is also seen working out, giving signed copies of a book (a reference to her book “Pretty Intense: The 90-Day Mind, Body and Food Plan that will absolutely Change Your Life”) while wearing a T-shirt from her Warrior women’s apparel collection, and handing over to a model a piece from this collection, as well, to wear it during a photo shoot.

Onscreen lines urge viewers to start with their idea, find their perfect name (domain name), and buils a better website.

This is not the first time Danica Patrick stars in a GoDaddy commercial. She has appeared, so far, in 21 commercials for GoDaddy and was placed in 13 Super Bowl commercials for the company. In 2015, GoDaddy pulled its “Lost Puppy” ad starring the famous athlete and businesswoman after the complaints from animal advocates.