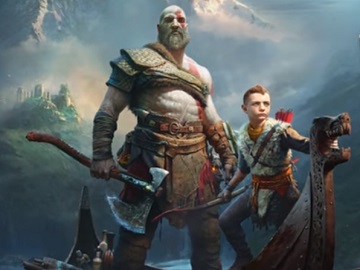 PlayStation has released a commercial for the upcoming God of War, from Santa Monica Studio and creative director Cory Barlog, set to be released next month, on April 20.

The game follows Kratos, who, together with his son Atreus, ventures into the brutal Norse wilds and fights to survive and fulfill a deeply personal quest. Throughout his dangerous journey, he must adapt to unfamiliar lands, unexpected threats, and a second chance at being a father. Moreveor, he must teach his young son to fight for survival, as well, in a harsh, unforgiving world and control the rage that has long defined him. Set in a distinctly new realm with its own pantheon of creatures, monsters, and gods, described as “a darker, more elemental world,” the game will draw players in to explore every inch of God of War’s threatening landscape, which is “by far the largest in the franchise”.

A new main weapon and new abilities are also included.

“My son, we do not fight because the world makes us fight. We fight for a greater purpose. We forge into the unknown to fulfill the promise we made, no matter the darkness. Nothing will stand in our way.” Kratos is heard telling Atreus in the action-packed trailer, which focuses on Atreus’ training and ends with the message “Greatness awaits”.