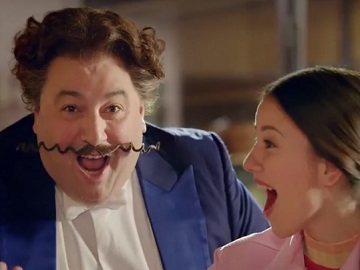 GoCompare promotes, in a new advert, its 2-for-1 main course deal offering a free membership to dine in thousands of restaurants across the UK to those who buy car or home insurance through GoCompare.

“You know that awkward moment when you have to decide who picks up the tab after a hearty meal out?” the voiceover asks at the beginning of the spot, which features a group of friends in a restaurant trying to decide who’s going to take care of the bill. “Well, you can afford to be generous with your 2-for-1 main course deal in hundreds of restaurants, which you can enjoy thanks to GoCompare. Yes, indeed, because when you get your car or home insurance through GoCompare, you can save on restaurant bills for a whole year,” the voiceover adds. The company’s opera-singing mascot, Gio Compario (played by Welsh tenor Wynne Evans) also makes an appearance, performing an original song.

At the end o the spot the tagline “Eat out more. Fork out less” flashes across the screen, while Compario and the people in the restaurant are dancing in sync.

The advert also informs that one membership is worth £49.99 and is valid for 12 months. It is also specified that it may have limits on days, dates and numbers and require advance booking.

The Newport-based insurance-comparison company has been using Welsh tenor Wynne Evans as its spokesperson for years in its advertising campaigns. The 2012 “Saving the Nation” campaign featured Evans in a series of adverts alongside Sue Barker, Ray Mears, Louis Spence, Stuart Pearce, and most famously Professor Stephen Hawking with all of them trying to kill him and thus save the nation from his singing about GoCompare. In 2015, after a 18-month break, he returned as Gio Compario in a new major national advertising campaign, even though the same year he had been ranked “the most annoying UK ad mascot ever”.