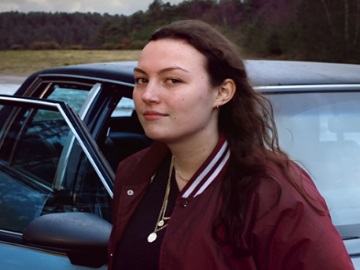 After “The Big Swim” and “Free to go. Free to stay”, giffgaff launched, earlier this month, a new advertising campaign, called “Stay, because you want to stay”.

The spot features a young actress named Molly standing in front of a car, in a wood near Farnham, in Surrey, England, delivering the following original spoken word piece written by Ed Morris, who also served as a director:

Big’s a big wig in a big leather chair in a big gig.
Small sits on a stool. Small’s nobody’s fool.
Big trips over small
Big’s an opinion
Small is a hunch
Big’s at a corporate lunch. Small has a sandwich
Small saves. Small raves
After Big’s fleeting greeting he’s soon back in a board meeting
Small holds your hand
Small’s your biggest fan
Small’s in the band
Big talks big talk
Someone can take a walk
Small whispers
Small listens
Says thank you
Says please
While bigs bigging it up like the big cheese
Small’s light on its feet
Small knows the street
Small’s where it’s at
Small’s got your back
Big’s all small print
All routine
Big’s all wafer and no ice cream
Small stands by
Small waves hi
Big says stop
You cannot go
The computer says no
Small smiles
Says hey, come round and play
Stay, because you want to stay.

The soundtrack music is the 1978 single “Hong Kong Garden” by the English rock band Siouxsie and the Banshees, from their debut studio album, “The Scream”. Widely acclaimed by critics, the album is regarded as a landmark of post-punk.

The advert, which debuted on Saturday, April 7, during The Voice, on ITV, was received with different reactions, some voices saying it failed to connect with them and that it didn’t showcase the points of difference between giffgaff and other providers.

giffgaff is a mobile telephone network running as a Mobile Virtual Network Operator (MVNO) using the UK’s O2 network. Launched in 2009, it ran multiple advertising campaigns. For some of the adverts the ASA received hundreds of complaints and recommended that they not appear again in their current form.