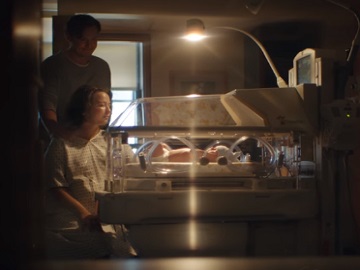 General Electric celebrates its status of proud worldwide sponsor of the 2018 PyeongChang Winter Olympics with a new commercial, aimed at highlighting that “GE imagines things others don’t, builds things others can’t and delivers outcomes that make the world work better”.

“It doesn’t matter to him that we power a third of the planet.”, the voiceover says at the beginning of the 60-second spot, referring to a young boy from an undeveloped country who’s going home after school in the company of his peers. “She doesn’t care that a plane powered by our technology takes off every two seconds.”, he also says, referring to an old lady who’s on her flight. “And she isn’t impressed that we spent three centuries of invention.”, the voiceover adds, referring to a young mother who looks at her newborn baby girl. “Because what matters to them is that her grandson is starring in his school play. Her daughter will be coming home tomorrow.

It’s getting dark and he has homework to do.”, the voiceover adds, while on screen the boy shown at the beginning of the ad is seen taking his shoes off and getting inside his house to do his homework.

“Technology is how we do things. People are why we do things.” flash across the screen as the commercial ends.
This ad is actually made up of images included in three different ads, showcasing the company’s “amazing creations”, like an algorithm that helps stabilize babies’ temperature, an advanced incubator with minimal noise for premature babies, the world’s most powerful jet engine, hard slider made using 3D printing technology, one of the biggest wind turbines, and more.

General Electric has been a longtime dedicated partner of the Olympic Games (since 2005, more precisely), providing a wide range of innovative products and services that are integral to staging a successful Olympic Games, including power, lighting, and water treatment as well as ultrasound and MRI equipment to help doctors treat athletes at local hospitals. GE’s Olympic Games partnership continues through 2020 Summer Games, which will take place in Tokyo, Japan.