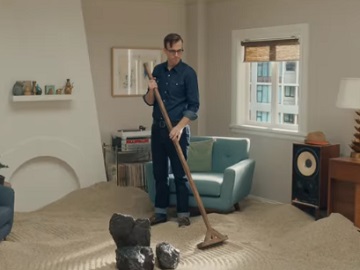 An anxious home-buyer goes a little overboard and builds a zen garden in his apartment to calm his nerves in the latest GEICO ad, which highlights that the company also helps with homeowners insurance.

Titled “Zen Apartment”, the 30-second spot opens with a woman, played by JJ Nolan, entering the apartment and, seeing him using a rake to level the sand covering the entire floor, asking if he’s still nervous about buying a house. Her husband, played by Kieran Cronin, admits he is “a little” and says he thought he could “de-stress with some Zen gardening”, while emptying sand out of his shoe. “At least we don’t have to worry about homeowners insurance. Just call GEICO,” the woman tells him, which surprises him as he apparently didn’t know about that. Learning that she has been a GEICO customer for years, he concludes he should clean the place up. When his wife opens a closet to get the dustpan, she faces a sand avalanche before he tells her the dustpan is behind the golf clubs.

The commercial ends with the voiceover saying “Get to know GEICO and see how easy homeowners and renters insurance can be.

This year, GEICO has been promoting its homeowners and renters insurance in several ads. One of them featured a man’s lawnmower getting increasingly modified into a supercharged racing mower as the owner was talking to his neighbor, and another one featured a man looking to move doing “karate therapy” to help relieve some of the house-buying stress.