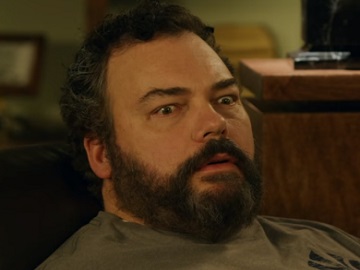 GEICO has released a hilarious new commercial, featuring a Yankees fan who is stunned when he learns his prized baseball from the 1999 World Series is destroyed.

The 30-second spot opens with a man (played by Danilo Di Julio) sitting in an armchair and watching a baseball game on TV. “Looks like a rain delay! This game is brought to you by GEICO. Fifteen minutes could save you fifteen percent or more on car insurance,” the announcer says. At this point, the man’s wife (played by Mim Drew) enters the room, with a laundry basket in her hands, approaching him. “So I guess you heard…” she tells him. “That GEICO could save you money on car insurance? Yeah,” her husband answers. Unfortunately for him, she didn’t refer to that, but to his ’99 World Series ball. “Dog got a hold of it. It’s toast,” she says, showing him the damaged ball and placing it then in its place. Seeing the petrified look on his face, the woman decides to turn around and leave without saying anything else but “Ok”.

“So now you’ve heard. GEICO – Saving people money on car insurance and now a proud partner of Major League Baseball,” the voiceover says at the end of the spot, which also features Di Julio concluding he should have got a cat.

Di Julio has filmed and produced a number of independent commercials, played roles in shows like NBC’s “Parks and Recreation”, ABC’s “Modern Family”, HBO’s “Silicon Valley”, the multi Oscar winning Best Picture “ARGO”, and booked numerous other credits in TV, film and over 175 commercials including multiple Super Bowl spots. In 2015, he won the award for “Best TV Pilot” at the Hollywood & Vine Film Festival for “Band Life” which he directed, while also playing a supporting role.

They are the latest names to join a growing roster of actors starring in ads for the insurance company. Darren Richardson portrayed the first heckler in recorded history, British actor Max Lloyd-Jones, who plays Jacob on ABC’s Once Upon a Time, was a knight teased by Richardson’s character, David Ebert made appearances in several ads, as well as Steve Talley, who played a space captain who lost the keys to his ship just when the galaxy needed him most.