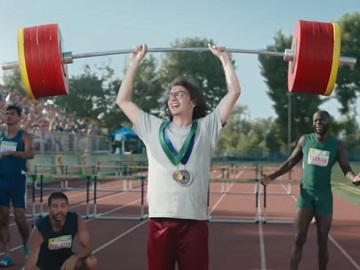 A man goes from competing in a weightlifting competition to hurdling down a track, winning both contests, in the latest GEICO ad.

The spot, titled “Weightlifter Wins Track Race” and released with the #WinWin hashtag, features the hero – so-called Ari Sneider (played by Demetri Belardinelli), who doesn’t have the appearance of a weightlifting champion, easily lifting a 272kg weight and saying to the camera that once he started looking for car insurance, it was “a no-brainer”. “I switched to GEICO and saved hundreds. That’s a win. But it’s not the only reason I switched,” he also says while starting to run with the weight above his head. He then mentions, as he participates at the track race, that the GEICO app makes it easy to manage his policy, allowing him to pay his bills, add a new driver, or even file a claim. “Woo. Hey now, that’s a win-win,” he adds as he wins, but referring actually to the benefits of the GEICO app.

“Switch to GEICO. It’s a win-win,” the voiceover says at the end of the commercial.

Belardinelli is an actor and writer, known for Silicon Valley (2014), Idiotsitter (2014) and Girlboss (2017). He is the latest to join a growing roster of actors starring in GEICO ads. George Kareman, who also had a role on the hit series Silicon Valley, plays, in its commercial for the insurance company, a guy who showed people how easy it is to switch to GEICO, all while doing aerobics in a recliner, James Garrett portrays a grandfather whose nose performs Flight of the Bumblebee while he is napping, Mary Scheer as an “armsketball champion” that makes arm wrestling while shooting hoops look easy, Casey Campbell as a baseball fan who misses the opportunity to catch a foul ball, Bob Stephenson portrays a father who, while mowing his lawn, ends up with one last strip of grass that’s exactly the width of his mower and shares his success on social media, Jack Plotnick and Daniele O’Loughlin play a couple who turn their living room into a rain forest to reduce the stress of moving, David Anthony Hinton plays a nervous renter who covers his apartment in packing bubbles to keep everything protected, Daniel Roebuck plays Alexander Graham Bell as he rudely answers his phone in the middle of a show, Darren Richardson portrays the first heckler in recorded history, British actor Max Lloyd-Jones plays a knight teased by Richardson’s character. David Ebert made appearances in several ads, as well as Steve Talley, who played a space captain who lost the keys to his ship just when the galaxy needed him most.

Previous: Credit Karma Commercial – Man with Hair in Ears and Nose
Next: Samsung Upgrade to Galaxy Commercial – Girl Unimpressed by the Northern Lights