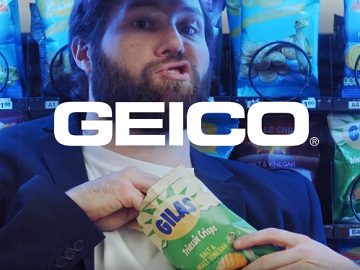 In one of them, running 15 seconds long, two co-workers trying to buy an afternoon snack from a vending machine realize they are in a GEICO ad. While the woman is selecting the product she wants, the man, named Ron and played by Michael Sigler, says “I told her: Who’s got two thumbs and saved hundreds with GEICO?” “This guy!”, he adds, pointing his fingers towards himself. “You sound like a GEICO commercial”,the woman, named Susan and played by Bianca Bryan, answers. At this point, actor and comedian David Ebert is seen in the vending machine, telling the two colleagues that this is a GEICO commercial and adds “GEICO” while munching on crisps.

Born in New York, Ebert is known for his appearances on MTV2’s Joking Off and MTV’s Guy Code. He has performed as an improv artist at Upright Citizens Brigade with the sketch team One Idiot and was featured in an episode of the Netflix series Master of None, created by and starring Aziz Ansari.

Ebert also stars in other five ads, part of the “A GEICO Commercial?”, which remind of Tide’s Super Bowl LII ad. He plays a baby, a coffee table for two ladies who are having tea, a blazer on a hanger, and a plant in a greenhouse, where two old ladies handle weekend gardening and talk about how much they saved on their car insurance with GEICO. He also gets his head out of a rice tray at a buffet, scaring a father and his young daughter.