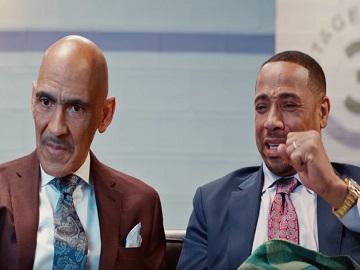 GEICO’s “It’s Not Surprising” campaign continues with a series of new ads from The Martin Agency Inc., starring Tony Dungy and Rodney Harrison.

In one of them, the historic Super Bowl-winning head coach and the ex-Patriots safety turned NBC analyst get comfortable during the NBC commercial break in breakaway suits, to the surprise of a crew member, who cannot believe her eyes. “Breakways suits during the commercial break? Surprising. What’s not surprising? How much you could save by switching to GEICO.” – the voiceover says on the 20-second spot.

Dungy and Harrison also star in other two commercials for GEICO, whose titles include the word “break”, namely “Heartbreak” and “Breakbeats”. While in the former Dungy comforts Harrison when he can’t contain his emotions during the commercial break, as he has a heartbreak witnessing the dramatic end of a love story on TV, in the latter, the two fellows are dropping a breakbeat during the NBC commercial break.

Among the celebrities starring in GEICO’s campaigns also are American Pie actor Steve Talley, who plays a space captain that loses the keys to his ship when the galaxy needs him the most, NHL all-star Braden Holtby, who’s shown struggling to make saves when he’s not between the pipes, country music singer Drake White, who sings “Heartbeat” at a summer party on a remote beach for a group of friends, and veteran music producer and “American Idol” alum Randy Jackson, who takes his judging talents to a kennel club dog show and others.