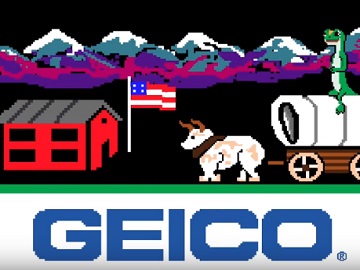 The Gecko is back in a new commercial for GEICO. This time, he jumps into the Oregon Trail game to see if he can successfully settle out west.

“I’ve always wanted to play Oregon Trail first hand.” the company’s mascot reveals, while on screen it is shown that he’s at the Kansas River crossing on March 13, 1848 and must choose between fording the river, taking a ferry or wait. He goes with the first option and ends up in the water, losing his supplies. “You know, if you’d switched to GEICO, you could have had money for the ferry.” the Gecko says before sinking.

The next day, after 50 miles traveled and 52 miles as the next landmark, an onscreen line informs that “The Gecko has exhaustion”. “Exhaustion? I’ve just been sit here.”, the Gecko says.

The GEICO Gecko, created by The Martin Agency and most recently a CGI creature generated by Framestore CFC, who was named “the most recognizable and memorable insurance mascot”, according to a 2015 survey from Q&A Research. He first appeared in 1999, during the Screen Actors Guild strike that prevented the use of live actors, and starred ever in more than 150 commercials, being voiced by actor Kelsey Grammer, British actor Jack Wood, who has provided the Cockney accent for a decade, Richard Steven Horvitz, and Dave Kelly.