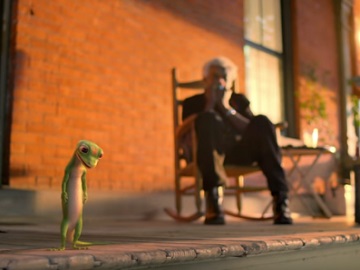 Lazy Lester (aka Leslie Johnson) stars in a new GEICO ad, alongside The Gecko.

The 30-second spot features the company’s mascot on the porch of a house, telling viewers he woke up in Memphis and told people about GEICO, how they could save 15% or more by just calling or going online to geico.com. The thing is that he is constantly interrupted by the blues musician, who’s playing the harmonica a few meters away, on the same porch. The Gecko stops for a moment and looks into Lester’s eyes with simpathy and then, realizing he’s going to interrupt him every single time he tries to say something, turns around and leaves.

The commercial ends with the voiceover (actor Jake Wood) saying the company’s tagline, “15 minutes could save you 15% or more on car insurance”.

Lazy Lester is only the latest in a long list of celebrities who star in GEICO ads. He also has his own video series, titled “Harp Translations with Lazy Lester,” in which the artist’s riffs have been translated into words.

“People been saying that ‘Tomato Red’ is going to be 2019’s color of the year, but I have my money on mauve because I think it is overdue for a major comeback.”, “Everyone gives me a hard time for quitting social media, but I find it gives me more time to focus on my favorite hobbies, like porch sitting,” “If you’re having a hard time remembering all your passwords, I recommend writing them on a notecard and putting that notecard in a safe whose combination you write on a computer whose password you write on a you know what never mind.”, are some of the translations made by GEICO for his fans.