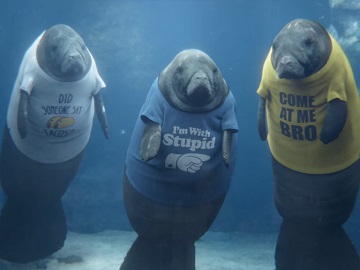 The latest GEICO commercial, part of the company’s “It’s Not Surprising” ad campaign, features a family visiting the aquarium who learns that manatees have the best fashion sense of all mammals.

The 30-second spot, titled “Manatee Shirts”, opens with the three-member family getting closer to the aquarium where the manatees (aka the sea cows) live and seeing four manatees wearing T-shirt with various prints and texts. One of them dons a T-shirt featuring the question “Did someone say tacos?”, another one a T-shirt featuring the “I’m With Stupid” and a hand with the index finger pointed laterally, showing toward a third fellow manatee, who’s sporting a T-shirt featuring the text “Come At Me Bro”. When the couple’s kid asks what this last message means, his dad answers “it’s something you say to a friend.”

“Manatees in novelty Ts? Surprising. What’s not surprising? How much money Matt saved by switching to GEICO.” – the voiceover (Andrew Anthony) says at the end of the spot, which also features a man presented as Matt from Cromwell, CT, stating that he saved $430 with GEICO. Finally, the tagline “Fifteen minutes could save you fifteen percent or more” is said.

Finally, a fourth manatee, wearing a pink T-shirt with the text “Let’s cuddle”, is seen joining the other three manatees, that apparently are males.

The commercial cast includes Mike Holley as the father, Joanne Verbos as the mother, and Levi Oleesky as their son.
GEICO’s “It’s Not Surprising” campaign also features dozens of other surprising facts, like Julius Caesar delivering a rousing albeit uninvited speech atop his namesake dish in a restaurant, a Buckingham palace guard taking full advantage of the new casual Friday policy, Washington Crossing the Delaware Turnpike. Among the celebrities starring in GEICO’s campaigns are American Pie actor Steve Talley, who plays a space captain that loses the keys to his ship when the galaxy needs him the most, NHL all-star Braden Holtby, who’s shown struggling to make saves when he’s not between the pipes, veteran music producer and “American Idol” alum Randy Jackson, who takes his judging talents to a kennel club dog show and others.