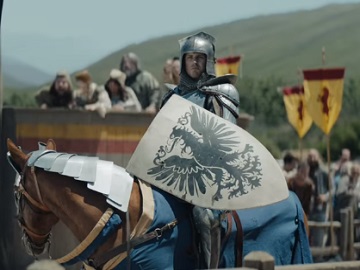 The first heckler in recorded history appears at a jousting tournament to taunt a visiting knight in the latest GEICO commercial, reminding people that you can always count on GEICO saving folks money.

The 30-second spot, dubbed “The First Heckler”, opens with a knight ready to start the tournament, when the heckler starts to call out taunts. “Hey, Sir Lose-a-lot! Thou has the patchy beard of a pubescent squire. Thy armor was forged by a feeble-fingered peasant woman… your mom!” the heckler, played by Darren Richardson, tells the knight, played by Max Lloyd Jones, making the other people in the auditorium burst into laughter.

“As long as hecklers love to heckle, you can count on GEICO saving folks money,” the voiceover says at the end of the spot, which also sees spokesman Steve Tom adding the company’s tagline, “Fifteen minutes could save you fifteen percent or more on car insurance”.

Darren Richardson is known for his work on the 2015 film Mad Max: Fury Road, 2016 film Criminal and the 2010 film The Tourist. He played the role of Tommy in Homecoming and has also appeared in The Prince & Me 2, My Big Fat Independent Movie, and Four Minutes.

Max Lloyd-Jones, the taunted knight, is the British actor who plays Jacob on ABC’s series Once Upon a Time. He also had roles in the series Supernatural, When Calls the Heart, Tower Prep, Motive, Teen Wolf, iZombie and Scream, and in the films Girl Fight, Restless Virgins, Field of Lost Shoes, and War for the Planet of the Apes.