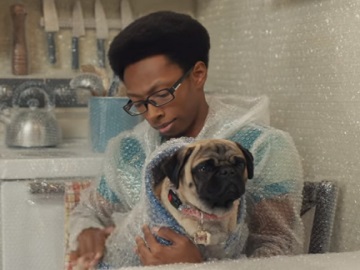 A nervous renter covers his apartment in packing bubbles to keep everything protected in the latest GEICO ad, which promotes the company’s renters insurance policy.

The 30-second spot features the guy, played by David Anthony Hinton, wearing a costume made of packing bubbles, grabbing a drink from the fridge, which is also fully covered in packing bubbles. Asked by his friend (played by Donald Lee Gipson) if he is still nervous about finding a new apartment, he confirms, mentioning that popping those things really helps him relax. Taking a piece of “paper” from the paper towl roll, which is actually packing bubbles, not paper, he takes a seat at the kitchen table, where his friend is already seated, asking him to stop popping his bubbles because he’s saving them for later. His friend takes the opportunity to tell him to go to geico.com for renters insurance. The hero is surprised to learn that GEICO helps with renters insurance, but says he will check them out when his friend mentions that he’s “been doing it for years”.

The commercial ends with the voiceover saying “Get to know GEICO and see how easy homeowners and renters insurance can be.

This year, GEICO has been promoting its homeowners and renters insurance in several ads. One of them featured an anxious home-buyer who built a zen garden in his apartment to calm his nerves, a man’s lawnmower getting increasingly modified into a supercharged racing mower as the owner is talking to his neighbor, and another one featured a man looking to move doing “karate therapy” to help relieve some of the house-buying stress.

David Anthony Hinton is a Los Angeles-based actor who had parts on the 2015 film Game Shakers, in the 2017 drama Kings, starring Halle Berry and Daniel Craig, and on Liza Koshy’s new 2018 YouTube Red show “Liza on demand”. His first national commercial was for The Real Cost Campaign, in June 2015. Done by FCB New York advertising agency and titled “Boomerang: A Brilliant Reason,” the spot was aimed at encouraging people to quit smoking.