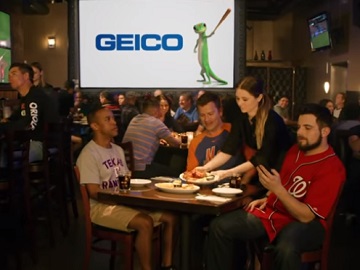 The latest GEICO ad features a baseball fan who immediately regrets his decision after diving into a plate of ghost pepper wings.

The spot, set in a bar where people are gathered to watch a baseball game, opens with a waitress bringing a young man his order – a plate of wings. Starved, the guy (played by Corey Landis) begins to eat, whilst one of his friends asks “So I guess you’ve heard, huh?” “That GEICO could save you 15% or more on car insurance?” he asks in response, still chewing. “No, that those are, uh, ghost pepper wings,” the other friend says. Informed that “it’s a sleeper heat,” the hero, a Mets fans, drops the wing onto the plate and starts screaming. “Uh, Holy Moly Moly!” he shouts, feeling the heat.

“So now you’ve heard. GEICO – Saving people money on car insurance and now an official partner of Major League Baseball,” the voiceover says at the end of the commercial, which also sees the company’s mascot The Gecko on one of the screens installed in the bar.

The cast ensemble also includes Brogan Burnside as the waitress and Arvie Lower Jr. and Matt Lieberman as Landis’ friends. They are the latest names to join a growing roster of actors starring in commercials for the insurance company. Darren Richardson portrayed the first heckler in recorded history, British actor Max Lloyd-Jones, known as Jacob on ABC’s Once Upon a Time, was a knight teased by Richardson’s character, David Ebert made appearances in several ads, as well as Steve Talley, who played a space captain who lost the keys to his ship just when the galaxy needed him most.