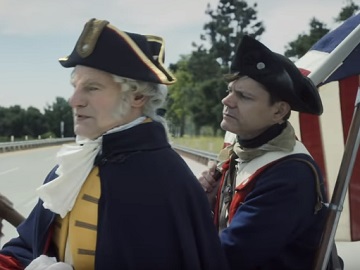 GEICO has released a new ad, part of its famous “It’s not surprising” campaign, created by Martin Agency, to highlight how much money people could save on car insurance by switching to GEICO.

The 30-second spot features George Washington and troops facing logistical challenges and danger as they cross the Delaware Turnpike. The first President of the United States, portrayed by Jim Meskimen, is seen in a boat which is dragged and pushed by subordinates, while drivers are waiting for him to clear the road. When one of them honks, Washington shouts at him saying “Alright! Alright! We’ve all got places to go!”. “Washington crossing the Delaware Turnpike? Surprising. What’s not surprising? How much money Shawn saved by switching to GEICO.” – the voiceover
says, while on screen a man presented as Shawn from Charleston, SC, revealing he saved $419 with GEICO.

At this point, Washington is seen again commenting about the driver who hooted at him that he’s a “big man with a horn”. Finally, the voiceover adds the company’s tagline, “Fifteen minutes could save you fifteen percents or more.”