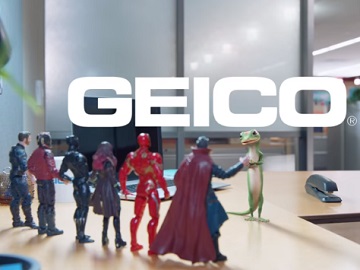 GEICO’s Gecko gets hyped for Marvel Studios’ Avengers: Infinity War in the latest commercial for the insurance company. The mascot rallies the Avengers to help save people money on their car insurance, but gets interrupted by a coworker.

The 30-second spot opens with the Gecko, voiced by Jake Wood, saying “There was an idea: to bring together a group of remarkable people to help save the Universe… from paying too much on their car insurance.” while the Avengers are seen in front of him, in the shadow, and he, the Gecko, seems the one who brought them together for the mission. When he ends his sentence, a colleague opens the door with a plate in her hand, letting him know there is cake in the breakroom. Seeing the Gecko standing on a desk, in front of Avengers action figures, the woman asks him what he is doing, but the answer she gets is evasive. “Nothing?” the Gecko asks, in his attempt to get away without giving an explanation.

A range of Avengers toys and action figures are available for purchase at major retailers including Target and Walmart.

The upcoming superhero film based on the Marvel Comics superhero team the Avengers, intended to be the sequel to 2012’s Marvel’s The Avengers and 2015’s Avengers: Age of Ultron, is set two years after the Avengers were torn apart during the events of Captain America: Civil War and follows the Avengers as they join forces with the Guardians of the Galaxy to stop Thanos from collecting the Infinity Stones before his onslaught of destruction puts an end to half the universe.