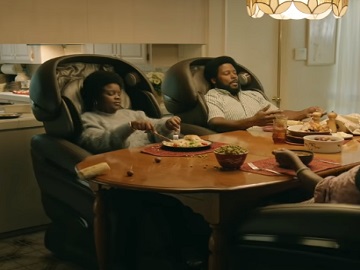 A family uses unusually high powered massage chairs to reduce the stress of buying their new house in one of the latest GEICO ads.

The 30-second spot features the family around the table, at dinnertime, with the dad (played by Calvin Tenner) asking how the are the massage chair working out for everyone. His wife (played by Tuharah Karter) says she is still a little stressed about buying their new house, which makes the man remind her that it’s a good thing they don’t have to worry about homeowners insurance since GEICO can help with that. “We can get homeowners insurance help from GEICO?” his wife asks surprised, trying to have a drink but spilling it because of the massage chair. The husband confirms, mentioning that the insurance company could also save them “a bunch, too”. In response, the woman says she’s starting to feel better already.

“Get to know GEICO and see how much you could save on homeowners and condo insurance,” the voiceover says at the end of the commercial, which sees the family’s pets – a dog, a cat and a white bunny – eating food off the floor.

The cast ensemble also includes Marilyn Harris as the grandmother and Keith Williams as the couple’s son. They are the latest names to join a growing roster of actors starring in ads for the insurance company. Casey Campbell also stars as a baseball fan who misses the opportunity to catch a foul ball, Jack Plotnick and Daniele O’Loughlin play a couple who turn their living room into a rain forest to reduce the stress of moving, David Anthony Hinton plays a nervous renter who covers his apartment in packing bubbles to keep everything protected, Daniel Roebuck plays Alexander Graham Bell as he rudely answers his phone in the middle of a show, Darren Richardson portrays the first heckler in recorded history, British actor Max Lloyd-Jones plays a knight teased by Richardson’s character. David Ebert made appearances in several ads, as well as Steve Talley, who played a space captain who lost the keys to his ship just when the galaxy needed him most.