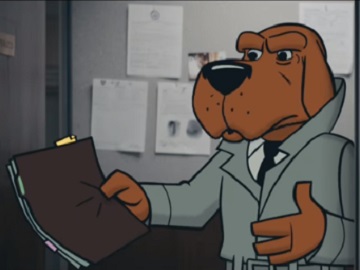 A new GEICO spot highlights that, “As long as people talk baby-talk to dogs, you can count on GEICO saving folks money”.

The commercial features McGruff the Crime Dog trying his best to do his job and fighting baby talk since his coworkers apparently just can’t help from treating him like a pup. When telling his superiors that he just got a tip that will crack their case, which hit a dead end, wide open, he is faced with the following reaction: “Awwww…. did McGruffy Wuffy get a tippy wippy?”. “I’m serious. We got to move fast before…”, the dog says, but the baby talk keeps going on: “Who’s a good boy? Is him a good boy?”, one of the investigators asks. McGruff gives up and says he’s just going to go. At this point, another colleague shows up, asking him “Oh, you want to go outside? You gotta go tinky poo-poo?” “I already went, ok? In the bathroom!” McGruff replies, expressing his anger.
“As long as people talk baby-talk to dogs, you can count on GEICO saving folks money.”, GEICO’s spokesman Steve Tom says at the end of the commercial, adding the tagline “Fifteen minutes could save you fifteen percent or more on car insurance”.

The commercial cast includes Jim Forbes as the voice of McGruff, James Biberi, Charles Emmett and Lindsay Forbes as the three detectives.