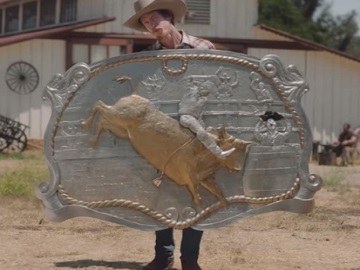 A cowboy’s belt buckle takes on a life of its own after hearing the benefits of switching to GEICO in one of the latest ads released by the insurance company.

The spot features two cowboys, a younger one (played by Brad Berryhill) and an older one (played by Lee Swimmer), as they talk about what GEICO offers. “You know what? I just switched to GEICO and got more,” Berryhill’s character says. “More?” Swimmer asks, eager to know what his fellow is referring to. Berryhill then says he got a company he can trust, with over 75 years of great savings and service, and – as he says that – his belt buckle becomes bigger. “You can’t argue with more,” Swimmer says, which leaves Berryhill asking “Why would you?” with his buckle belt now so big it almost covers his entire body.

The commercial ends with the voiceover (Andrew Anthony) saying the company’s tagline, “Expect great savings and a whole lot more”.

Brad Berryhill had parts on Sam Taylor-Johnson’s drama “A Million Little Pieces” and on the hit series “Lost” and “Criminal Minds”. Lee Swimmer is known of his roles on Long Cut (2002), Eagleheart (2010) and Transparent (2014).

The “Expect great savings and a whole lot more” series from GEICO also stars Steven Bailey as a man whose lawnmower gets increasingly modified into a supercharged racing mower as he talks to his neighbor while gardening about GEICO. Gil Christner and Celeste Pechous co-star.