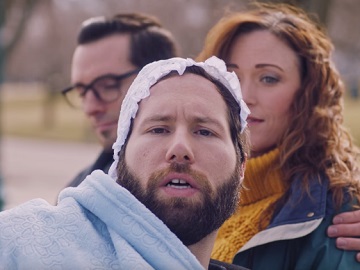 Ebert, who’s known for his appearances on MTV2’s Joking Off and MTV’s Guy Code, doesn’t take centre stage in the ads, but only makes an appearance to confirm that they are GEICO ads and say the tagline.

One of the 15-second spots features a couple sitting on a bench in the park. The woman, who’s apparently holding a baby at her chest, says she’s so glad he’s asleep. In response, her husband says he’s so glad they can pay their GEICO bill from anywhere 24/7. “You’re talking like a GEICO commercial,” his wife tells him a little bit annoyed. At this point, Ebert, who’s playing the baby, throws the pacifier he was having in his mouth, and says to the camera “This is a GEICO commercial. GEICO. You could save, too”.

Ebert has thus joined the likes of GEICO’s famous pitchmen including the Gecko, Maxwell, the cavemen, actor Jerry Lambert, who played a bland salesman, actor Scott Whyte, who has made a series of commercial parodies calling the company “Schmeiko”, and a host of celebrities that starred in GEICO ads over the years.