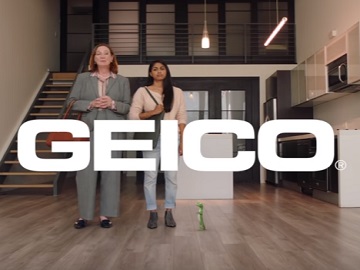 The Gecko tries to sell an apartment in one of the latest GEICO ads, but what it seems to the perfect place for a woman proves to have some flip sides.

The 30-second spot features the potential renter (played by Monica Padman), who, after seeing an apartment, says it’s great for her, even though the real estate agent told her that it is under her budget. The Gecko intervenes to inform the young woman that, when she moves in, GEICO could help her save on renters’ insurance, but so does one of the neighbors, who shouts from the other side of the wall that GEICO helped him with renters insurance, too. The company’s mascot can’t help but notice that the walls “seem a bit thin,” which is confirmed by another neighbor, who reveals that the first neighbor who had made himself heard earlier, Craig, practices accordeon every night. The latter gives a reply that reveals something about the other neighbor, as well: he sings karaoke by himself and he’s tone deaf.

The Gecko realizes that the respective apartment will remain vacant and suggests to move on to the next one. The neighbors try to convince the potential renter that the building is great, with mixers every Thursday, but the look on her face says everything.

The commercial ends with the voiceover saying the tagline “It’s easy to switch and save on homeowners and renters insurance”.

GEICO’s reptilian mascot, an anthropomorphic Day Gecko created by The Martin Agency and modified in 2005 to a CGI character by Animation Director David Hulin and his team at Framestore, first appeared in 2000, during the Screen Actors Guild strike that prevented the use of live actors and became the company’s longest-running mascot, appearing in more than 150 commercials. He has been voiced, over the years, by multiple actors, including Kelsey Grammer, Dave Kelly, and Jake Wood.