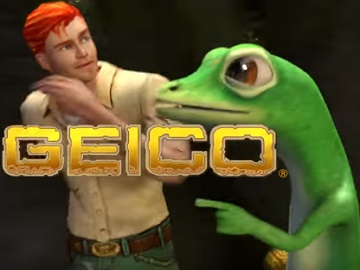 After jumping into the Oregon Trail to see if he can successfully settle out west, GEICO’s Gecko joined another game for a new commercial. This time, the company’s mascot tries his hand at Temple Run, the 2011 3D endless running video game developed and published by Imangi Studios.

The 15-second spot features the Gecko running alongside Guy Dangerous, the default character, described as “just your average explorer”, and telling him “When you invited me to Temple Run, I was expecting an easy jog, not sprinting from the Demon Monkey.” (The Evil Demon Monkeys, with skull like masks on their heads and black fur, are the main antagonists of Temple Run and Temple Run 2, chasing the player in their quest to retrieve the golden idol.) “You know what is easy? Go in to Geico.com to see how much you could save.”, the Gecko adds, while still being chased by the Demon Monkey.

Created by The Martin Agency and most recently a CGI creature generated by Framestore CFC, the Gecko was, according to a 2015 survey from Q&A Research, “the most recognizable and memorable insurance mascot”. Voiced by actor Kelsey Grammer, Richard Steven Horvitz, Dave Kelly, and British actor Jack Wood, the gold dust day gecko appeared in more than 150 ads.

Other GEICO mascots include the GEICO Cavemen, from spots claiming using their website is “so easy, a caveman could do it”, Maxwell, the GEICO “Piggy” who shouts a long “Whee”, the “Happier Than….” duo, consisting of Jimmy (actor Timothy Ryan Cole) and Ronnie (musician Alex Harvey), who are playing a guitar and a mandolin, respectively, on a small portable stage, Kash, the stack of cash that represents the money you could have saved by switching to GEICO, and others.