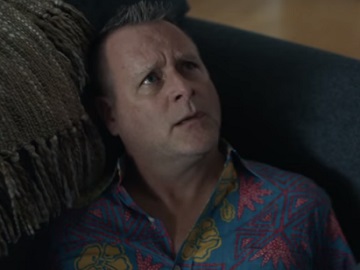 The spot features the husband, played by Jack Impellizzeri, searching for the remote control under the pillows and finding instead his wife’s old portable CD player, his highschool retainer, and Dave Coulier. When the woman, played by Elizabeth Bond, recognizes him as the early ’90s sitcom star, Coulier says one of his signature catchphrases (“Cut-it-out”), making the couple burst into laughter. “What year is it?” he then asks his “hosts”, who can’t stop laughing.

“As long as stuff gets lost in the couch, you can count on GEICO saving folks money. Fifteen minutes could save you fifteen percent or more,” GEICO’s spokesman Steve Tom says at the end of the spot.

Dave Coulier became known in the late 1980s and the early 1990s for playing Joey Gladstone on the ABC comedy series Full House. In 2016, he reprised his role for the Full House spin-off, “Fuller House”. He has also done extensive voice work over the years for shows including The Real Ghostbusters, Slimer! and the Real Ghostbusters, Extreme Ghostbusters, Muppet Babies, Scooby and Scrappy-Doo, The Jetsons, Detention, and others. From 1984 to 1985, he was also the host of a comedy series on Nickelodeon known as Out of Control.

This is not the only GEICO ad he stars in. He sets the record for most dad jokes told in a row in a “Sit-Down Comedy” video and shares some of the things we all should probably cut out of our lives in the “Life Lessons” video. “Wearing socks with sandals”, “Wearing gym clothes but never really going to the gym”, “Being the first to like your own post”, “Holding out to your ’90s hairdo hoping it will come back into style” are among the things to be cut out, according to Coulier.