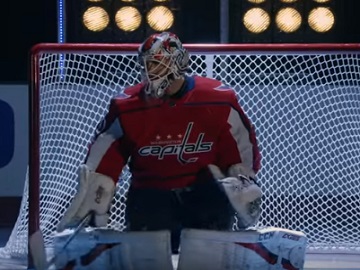 GEICO celebrates its status of proud partner of the NHL with a new commercial starring Braden Holtby.

The Washington Capitals hockey goaltender, who was enlisted by the insurance company as one of its spokesmen, has also starred in other ads. In a recent one, he tries to make some incredible saves off the ice. First, he’s trying to save a document on a computer, but, since he’s wearing his blocker, fails to press enter. Then, he’s trying to catch his food order, that a waitress is sliding down the bar, while wearing the same blocker, which obviously leads to another fail. The full gear is on also during his last attempt endeavor – trying his hand as a pool lifeguard.

Over the years, GEICO has enlisted also other athletes to star in its advertising campaigns. Some of them are Capitals forward Nicklas Backstrom and defenseman Mike Green, Ed “Too Tall” Jones, who has a 15-year career with the Dallas Cowboys, linebacker for the Washington Redskins Brian Orakpo, and Dikembe Mutombo, a retired professional basketball player for the Houston Rockets of the NBA.