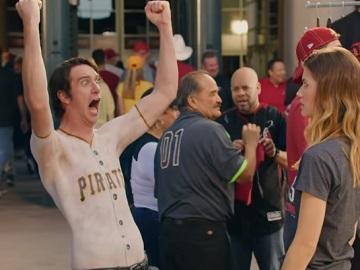 “Spending a first date at a ball game is a great idea unless of course that date is with a chest painter.” this is the idea behind one of the latest GEICO ads, which also celebrates the company’s status of “Official Auto Insurance Partner of Major League Baseball”.

The 30-second spot, titled “First Date Surprises”, features a man and a woman on a first date at a baseball game after having met on an online dating platform. The two are about to enter the stadium when the woman, played by Sydney Hawes, tells the guy, played by Matt Hudacs, that their date is going really well. “Yeah, so I guess you’ve heard then?” he asks her. “What, you mean that whole saving money with GEICO thing?” she asks, in return, since she had just seen GEICO’s logo and tagline at the entrance. “No, that I’m actually a chest painter,” he answers, unbuttoning his shirt and revealing his painted chest. It also soon turns out he is #1 fan of Pittsburgh Pirates. “Wow, that was not on the profile,” says to herself the woman, who’s left behind by the excited fan.

“So now you’ve heard. GEICO – Saving people money on car insurance and now an official partner of Major League Baseball” the voiceover says at the end of the spot.

Actress Sydney Hawes, who had roles in the 2012 films “Milk and Cookies” and “Two Close”, will also be seen next year in Andrew Osburn’s comedy “The Miss OTB Scandal”, in which she will play Miss Nevada. According to the official synopsis, “The Miss OTB Scandal” is a mockumentary that traces “the rise and fall of the dubious duo Jackie Fontaine and Kitchatty Katchatty,” who crumble after the scandal triggered by a fictitious charity funded by The Miss OTB beauty pageant.