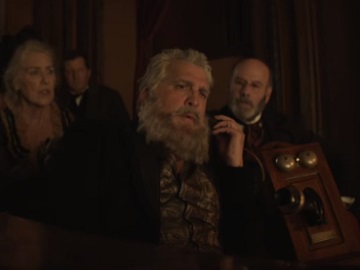 GEICO highlights, in one of the its latest commercials, that “As long as people talk too loudly on the phone, you can count on GEICO saving folks money”.

The 30-second ad opens with a scene from a theatre play having as protagonists a couple portrayed by actors Kurt Quinn and Kelly Vrooman and features Alexander Graham Bell (the inventor of phone, played by Daniel Roebuck) rudely answering his phone in the middle of the show and talking very loudly, interrupting the actors. Soon after they resume the play, Bell’s phone rings again.

The end of the spot sees GEICO’s spokesman Steve Tom saying “As long as people talk too loudly on the phone, you can count on GEICO saving folks money” and adding the tagline “Fifteen minutes could save you fifteen percent or more on car insurance”.

Daniel Roebuck is known as Deputy Marshal Robert Biggs in “The Fugitive” and its spinoff film “U.S. Marshals”, Jay Leno in “The Late Shift”, and Dr. Leslie Arzt in “Lost”. He has also appeared in numerous Rob Zombie and Don Coscarelli films and in series like “Glee”, “Castle”, “Criminal Minds”, “Sonny with a Chance”, “Star Trek: The Continuing Mission”, “Law & Order”, “Monk”, and others.

This is not the first time GEICO uses in its advertising campaign famous figures. McGruff the Crime Dog and George Washington have also been used.