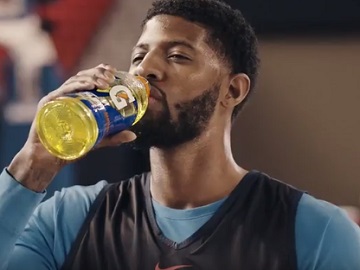 “Whether it’s a finger roll or a sip of extra smooth Gatorade Flow, nobody enjoys a smooth finish more than Paul George,” this is the message conveyed in the latest commercial released by Gatorade, starring Paul Geoge.

The Oklahoma City Thunder player, who introduced the Gatorade Flow Smooth Finish Drink in a 2017 ad for the sports drinks brand, is seen, in the 15-second spot dubbed “AHHH”, taking a sip of Gatorade Flow and saying “Ahhhh” for a few long seconds that make his teammate ask “Are you done?” In response, George raises his index finger to silence him so that he could keep enjoying the taste of Gatorade Flow.

Gatorade Flow Smooth Finish range, designed to hydrate your body during athletic activity, includes flavors like Kiwi Strawberry, Blackberry Wave, Pineapple Mango and Tidal Punch. With fewer calories than the original Gatorade formula, but with the same ingredients, such as potassium, sodium and sugar, the drinks are available for purchase through Amazon, Target, and other retailers, by 12-pack or by the bottle.

Another star that endorsed Gatorade Flow is Patrick Kane. The professional ice hockey right winger for the Chicago Blackhawks of the National Hockey League (NHL) appeared in a commercial for the NHL playoffs drinking a Gatorade Flow on the bench before jumping on the ice to score the game-winning goal. Like Paul George in his own ad, Kane skates back to the bench after taking the shot, then begins to drink as the shot enters the net.