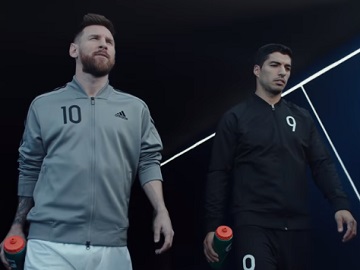 Aimed at highlighting that, as the European season comes to a close and friendships are tested, everything changes, except one thing, the campaign film revolves around the friendship between FC Barcelona players Lionel Messi and Luis Suárez, which turns into rivalry when it’s time for them to play against each other. The two football superstars are seen, at the beginning of the spot, walking together on the field, celebrating a victory with a hug and taking a selfie posted afterwards on Suárez’ Instagram account. “Some friendships will be put on hold, as the European season comes to a close. Teammates will become rivals,” a news presenter announces. At this point, scenes illustrating the rivalry between the two friends start ruling, with them training hard and trying to beat each other’s workout record at the Gatorade Sports Science Institute. When Suárez laughs at Messi’s 2nd place, the latter unfollows him on social media and answers, when asked by a journalist during a press conference, that his relationship with Suárez is “complicado”. Suárez, on the other side, sells Messi’s match worn jersey for $2, which becomes subject of news that Messi finds out from a newspaper.

“Everything changes, except what’s inside them” onscreen lines read at the end of the spot, when it turns out they still have something in common: fueling with Gatorade.

Developed for football players from amateur to professional levels, Gatorade Football Energy features a combination of carbohydrates, electrolytes and fluid and comes in three flavors: Lemon, Mango and Orange. The product is available to all U.S. athletes on the brand’s website and is scheduled to hit shelves in retail outlets in Mexico and Brazil later this year, before launching in other Latin American countries. The “Everything Changes” integrated campaign, set to run in several Latin American countries, Western Europe, Asia, Mexico, and the U.S., also stars Brazilian National Team superstar and Manchester City striker Gabriel Jesus. The TV spots will be complemented by print, digital and social media, point-of-sale and more.