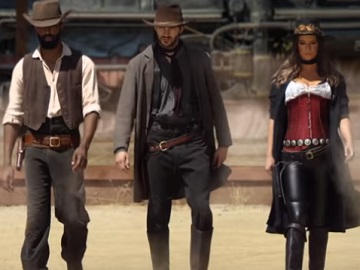 GameFly has released a new commercial, highlighting that you can play new and classic games from a selection including over 9000 titles, with free shipping and free 30-day trial.

The 30-second spot, set in the Western town of Gamefly, opens with a young woman named Willa who, learning that Dutch is coming for revenge on the noon train, runs to Jesse, who’s the town sheriff, to warn him. The latter is known by all residents for his achievements in terms of games – he has played over 9,000 games with GameFly. Dutch, on the other hand, wasn’t much for words but he’d come to settle the score.

The end of the commercial sees Jesse and Dutch spinning their game controllers before starting their duel and with the voiceover urging viewers to go to gamefly.com and play all the new and classic games. “Choose from over 9000 titles with free shipping and no late fees,” the voiceover also says, inviting people to start their 30-day free trial at gamefly.com.