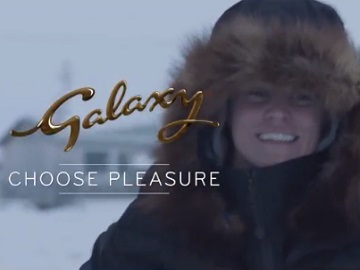 Galaxy Chocolate has launched a new campaign, titled “Choose Pleasure”, which includes a series of three films showing how three women choose pleasure and encouraging people to tell how they choose pleasure.

One of the films presents Katherine Keith, a woman from Kotzebue, Alaska, above the Arctic Circle. Describing herself as “a business owner,” “a mother,” and “an engineer”, she says she loves racing dogs competitively over thousands of miles across the wilderness. “This sport requires a lot of endurance and athletic ability, so the dogs and I’d have to form this wonderful bond,” she says, adding that she chose dogsledding as her passion and that “the companionship of being out there with the dogs is breathtaking in the simplicity but the clonal freedom is profound”.

The Galaxy brand, which has been long known for its ads encouraging women to “choose pleasure as an essential, rather than a luxury”, ran, at the end of last year, a spot dubbed “Thought Train”, featuring Shakespearean actress and published poet Jade Anouka. Soundtracked by the iconic song “Where is My Mind” written by the Pixies and re-recorded by Telepathic Teddy Bear, the spot delivered a powerful message through a series of symbols, reminding people to put down their phones and relax… with a bar of Galaxy chocolate.