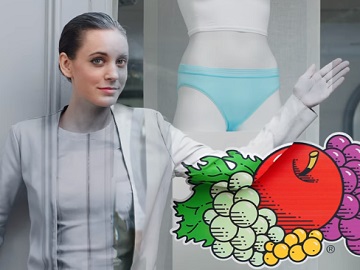 Fruit of the Loom’s Everlight underwear is the subject of a new ad, which illustrates some of the benefits of his underwear as experienced by an unnoticeable spokesperson.

“Fruit of the Loom’s Everlight underwear is so light, you won’t even notice you’re wearing it,” the spokesperson, a young woman blended into a Fruit of the Loom store window, says at the beginning of the 30-second spot. The woman, who keeps blending in with various other things, such as pastries in a pastry shop, fruits and vegetables at a local market, and the furniture and walls at the office, mentions that this underwear is made from incredibly light material and has no panty lines, which means no one else will notice it either. After blending in with the furniture and the walls at the office and avoiding thus to be called to work in weekend, she concludes that “going unnoticed can be sometimes nice”.

This is not the first time the brand advertises its EverLight underwear. In another recent ad from creative agency Crispin Porter & Bogusky, two men on a stakeout, who are professional noters, discuss Fruit of the Loom’s EverLight Underwear for men, without noticing that their van is being dismantled around them. The brand has also launched a commercial-within-a-commercial, which premiered during the 2018 NCAA Basketball Tournament, on TNT, to promote its Everlight line of underwear.