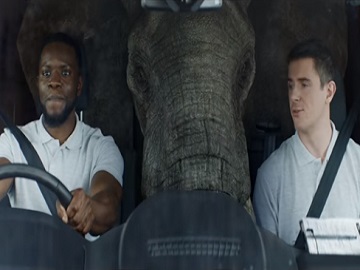 Ford UK has launched, together with the growing social movement Time to Change, an initiative encouraging people to open-up and talk about their mental health problems.

Ford, which is one of the UK’s biggest employers and one of the first automotive companies to promote mental health awareness in the workplace, has released a 30-second spot, titled “Elephant in the Transit”, highlighting that lots of men still struggle to talk about their mental health and that, “together, we can help change that”. The ad features two young men in a van in motion chatting about their plans for Friday night. When his fellow, Steve, starts acting weird, the driver decides to pull over and ask him to communicate his feelings. Onscreen lines read “If your mate’s acting differently, act.” The idea behind the campaign, “Don’t let mental health problems to be the elephant in the room”, is illustrated through an elephant placed between the two men.

The Time to Change national awareness campaign was preceded by a research conducted by Ford, which showed that 67% of people said they were more comfortable talking about issues when in a vehicle. This is the reason why the spot had the front seat of a van as a setting for the discussion between the two colleagues. Ford engineer Matt Loynes, who came through the lowest point of his mental health issues with the support of a friend, said “A vehicle is a great place to start talking because it’s like your own private bubble, where you’re on a journey together and you’re shoulder to shoulder. This is about getting everyone on-board and making it part of the culture to take a moment to listen to friends, colleagues and family, to understand and to find the right help for them”.

According to the research, around one in four people in the UK experiences mental health problems and young men, in particular, have been identified as a vulnerable demographic. 34% said they would talk openly about their feelings, while 31% of men said that they would be embarrassed about seeking help for a mental health problem.

Ford and Time to Change have also created five “top tips” as a starting point to help people across Britain to spot the signs and offer the necessary support. The steps are text/call and reach out, find a good time and place, go for a coffee, ask how they are – listen without judging, and treat them the same.