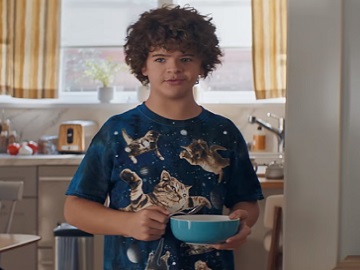 Titled “Binge Weekend”, the 30-second spot opens with a woman showing her new TV and new speakers to her two friends and telling them that, since she also has Netflix, her living room will be the place for binge watching. At this point, Gaten, who’s in the kitchen eating some cereals with a peer, intervenes, telling the woman, Mrs. D, that while she has “killer tech”, she still hasn’t Fios, “a 100% fiber-optic network literally engineered for streaming”. When Mrs. D says it’s a good advice, Gaten adds that he also has some ideas on a better cereal selection, which he will keep for himself, though.

The commercial ends with the voiceover urging viewers to experience Netflix on the 100% fiber-optic network made for streaming and to switch to Fios and get a year of Netflix on the company with a 2-year agreement. The offer, available until April 18, 2018, requires Netflix streaming subscription, compatible device, and fios subscription.
This is the second ad starring Matarazzo, who plays Dustin Henderson in the Netflix sci-fi drama series Stranger Things. In the first spot, he tells his friends, with whom he’s about to start playing a video game online, that Fios “makes your gaming system actually work awesome”.

Verizon’s roster of spokespersons also include HBO’s Silicon Valley star Thomas Middleditch, who endorses Verizon’s 4G LTE Coverage and Unlimited Plan. Paul Marcarelli, who worked for years as Verizon’s “Can you hear me now?” guy, switched to Sprint in 2016. In 2017, with the introduction of unlimited data wireless plans, the company started to add some of its actual employees to the commercials and systems performance engineer Ammara Bhaimeah was one of them, starring alongside lead pitchman Middleditch.