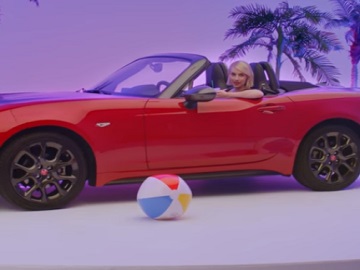 Emma Roberts stars in a new ad for Fiat, showcasing, this time, the 124 Spider. After appearing in a series of comedic spots at the wheel of a Fiat 500, the 27-year-ol old actress and singer, who teamed up with the Italian automaker for an online Twitter campaign, is hanging on to the last day of summer in the convertible 124 Spider.

“I’m supposed to sit in this 124 Spider and tell you it’s the last day of summer. But no one tells ME when summer ends,” Emma says from the red car, against an exotic backdrop, that includes palm trees. As she puts on a sunhat and begins sipping on a lemonade, an offscreen voice tells her “Summer ends today. Like on a calendar,” which makes her utter an “Oh!” in response.

In a previous spot, she celebrated National Dog Day (August 26) in a Fiat 500X full of puppies encouraging viewers to adopt a dog and get a Fiat. Other spots, based on real comments posted by people online about Fiat, such as “Fiats are so GIRLY,” “I hate when I get tricked by a Fiat in a parking lot,” and “Fiat drivers are so SLOW,” features her silence the haters with the impressive capabilities of the Fiat 500.

And, since it came to haters, they did not hesitate to express their thoughts about Emma Roberts on FIAT’s Twitter page. They recalled her charging with battery for beating her fiancé, actor Evan Peters, whom she started dating in 2012 and hit in July 2013, while they were staying at a hotel in Montreal, Quebec. Arrested, Emma was released several hours later because Peters declined to press charges.

In terms of partnerships with brands, Emma Roberts’ portfolio is not very large. In February 2009, she was named a brand ambassador for Neutrogena and appeared in print and television ads for the company.