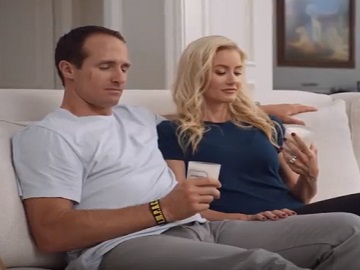 Drew Brees finds a way to relax while his kids bash watermelons in one of the latest FedEx commercials.

The 15-second spot features the New Orleans Saints quarterback and his wife lounging on the couch, in their living, and inhaling the smell of the lavender candles they received via FedEx, while outside their children bash watermelons.”Serenity,” the voiceover says, adding the tagline “What we deliver by delivering”.

This is only one in a series of instalments aimed at highlighting that FedEx delivers more than simple objects. “To us, it’s not just about packages and pallets, it’s about what we do for people and communities” the company states on its website, showing how they deliver hope by giving a helping hand after natural disasters, how they deliver compassion by providing eye care to rural communities, how they deliver community by ensuring a soccer field to a neighborhood in Poland, how they deliver conservation by transporting endangered pandas from China to the Calgary Zoo, in Canada, and more.

In a recent commercial, titled “Tortoise & The Hare,” the multinational courier delivery services company also shows how it delivers comfort to a little girl who loses one of her favorite stuffed toys. The idea of delivering more than packages is also illustrated through a series of 15-second comedic spots, featuring Steelers fans that find a unique way to celebrate Jerome Bettis and Bears fans that get creative with makeup.