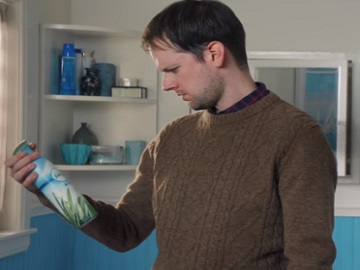 Febreze returns to Super Bowl for the second year with a commercial featuring “The Only Man Whose Bleep Don’t Stink”.

The brand of air freshener, which is made by Procter & Gamble, released a teaser, introducing Dave, the guy whose bleep don’t stink and urging viewers to make sure their bathroom is ready for the Big Game with Febreze since Dave is not coming to their Super Bowl party.

The 30-second teaser opens with Dave introducing himself and goes on with his parents talking about him and the way his peculiarity “affected” his life. “For a boy whose bleep don’t stink, Dave turned out to be a very-well adjusted adult.” – his mother says, mentioning they noticed his bleep don’t stink at his first birthday. His basketball coach in high-school, the cleaning man are also seen, the latter saying he misses Dave. Dave’s mom also specifies that her friend’s son is a lawyer, but Dave’s bleep don’t stink, and his dad pipes up, adding that “that’s better than being a lawyer”.

The commercial ends with the onscreen lines “Dave isn’t at your Super Bowl party. But everyone else is. Is your bathroom ready?” and with Dave asking his mother what Febreze is, seeing the air freshener in her bathroom.

Febreze made its first Super Bowl ad appearance in 2017 with a spot created by agency Grey New York, which is an ode to the halftime bathroom break and highlights that, when nature calls, you should bring Febreze.